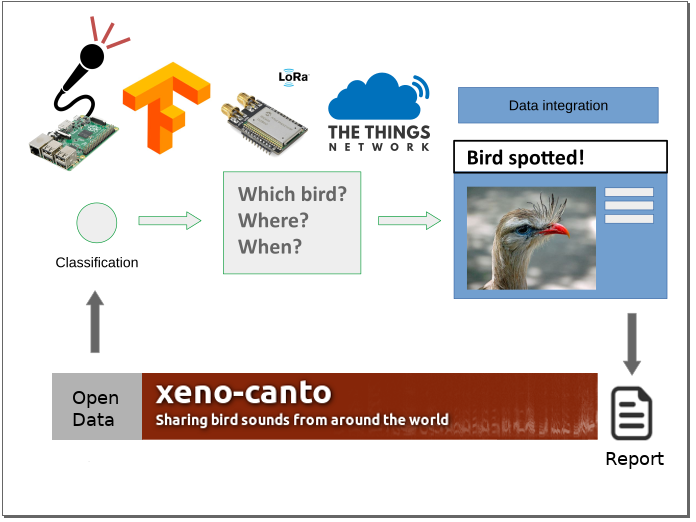 Why are we doing this?

Every living thing in a forest has its sound. To identify creatures, classify and trace them, sound detection has many promising potentials. With a focus on how to stay within or close to the low-power parameters of LoRaWAN, we want to monitor the sounds of the forest over long periods of time or in remote areas.

Unlike smartphone apps, whose data depends on the user's schedule, the data produced by our sensor could potentially cover the entire day and night time spectrum. An important use case could also be monitoring the interaction between animals and humans. Our dataset could easily encompass bird and human sounds (footsteps, voices, ...) to study behavior patterns. An examplery target group would be bird watchers. Bird watching is a popular pastime activity, and several apps exist for detecting and recording bird songs.

The low cost approach facilitated by The Things Network ensures that this project could be reproduced by both scientists, city-planners and amateurs alike.

More use cases, libraries, interesting datasets and example projects can currently be found in our Slack channel #mz-forest-sound-track

All year round, the forests of the city of Zurich receive thousands of visitors. How can we assess and quantify them easily and efficiently?

Read more details and see what is inside the box

Join the conversation at #MakeZurich and on The Things Network Switzerland Slack.
All attendees, sponsors, partners, volunteers and staff at our hackathon are required to agree with our very simple Code of Conduct: Be excellent to each other.

The contents of this website, unless otherwise stated, are licensed under a Creative Commons Attribution 4.0 International License.